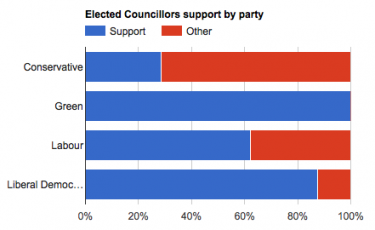 Following a hard fought campaign Space for Cycling emerged as the clear winner of the Bristol 2016 elections, securing not only the mayoralty, but also 63% of all the Councillors.

Mayor Marvin Rees (who also represents Labour) said “I support cycling. Not only does it have obvious health benefits in keeping people fit and improving the air quality, but it has social benefits too, getting people out and about, talking to each other, experiencing life.”

Following a very positive meeting with BCyC about the S4C Manifesto for Mayoral Candidates before the election, Mayor Marvin was absolutely resolute in saying, “I want to make cycling an ordinary part of everyday life. That means safety and space on roads. It also means developing the image of cycling and changing the nature of the conversation from competitive to co-operative.”

Just like most of the tens of thousands of people who ride everyday in and around Bristol, Mayor Marvin said, “I ride my bike everywhere but do not describe myself as a cyclist. And I do not want pedestrians pitted against cyclists who are pitted against car drivers. We all inhabit the same city and should work together to make Bristol better for everyone.”

Each of the 45 S4C Councillors made a statement in response to the S4C Manifesto for Council Candidates (along with 69 candidates who didn’t get elected). These show just how much support there is across the city to get serious about cycling. Statements included the following remarks:

20% cycling by 2020 could be a minimum not a target if we work together and have the right leadership in City Hall! (Labour)

Driving into the city is a mis-use of time and energy. I prove time and time again that the quickest way around Bristol is by cycle. Especially on short journeys into the city. (Conservative)

There is still much more to do in Bristol so we can reach a genuine tipping point where the cyclists and walkers set the agenda rather than the cars. (Green)

Driving in Bristol is becoming a more and more unpleasant experience and having good cycle routes will help the city to become a safer place for cyclists. (Lib Dems)

Bristol Cycling Campaign looks forward to working with Mayor Marvin Rees on the strategic changes to deliver Space for Cycling. We will also be working with Councillors and Neighbourhood Partnerships across the city to produce Neighbourhood Good Transport Plans.